In recent months, firms have been asking us about the process for managing drawdown plans. What do the rules require? Is a suitability letter necessary for every withdrawal? And a few other aspects. We take the opportunity here to share our views around this topic.

For the sake of clarity, this is about the rules around when withdrawals are required and not about the suitability of setting up a drawdown plan in the first place. That is described …

Withdrawals from a drawdown plan will be either regular or ad hoc/one-off. In both cases, a personal recommendation, confirmed in a suitability report will be required – unless it is an execution only scenario (see below).

This is because COBS rules state that a personal recommendation is required whenever a client is advised to buy, sell, subscribe for, exchange, redeem, hold or underwrite any designated investment.

And a suitability report is also required – COBS 9.4.1 states:

“A firm must provide a suitability report to a retail client if the firm makes a personal recommendation to the client and the client buys, sells, surrenders, converts or cancels rights under, or suspends contributions to, a personal pension scheme or a stakeholder pension scheme; or elects to make income withdrawals, an uncrystallised funds pension lump sum payment or purchase a short-term annuity.”

When the requirement to commence regular withdrawals arises and the drawdown plan is already in place, a separate recommendation and suitability report as to how to implement the withdrawals will be necessary.

In either case, there are specific rules around factors that must be identified and considered – COBS 9.3.3 states:

“When a firm is making a personal recommendation to a retail client about income withdrawals, uncrystallised funds pension lump sum payments or purchase of short-term annuities, it should consider all the relevant circumstances including:

(1) the client’s investment objectives, need for tax-free cash and state of health;

(2) current and future income requirements, existing pension assets and the relative importance of the plan, given the client’s financial circumstances;

(3) the client’s attitude to risk, ensuring that any discrepancy is clearly explained between his or her attitude to an income withdrawal, uncrystallised funds pension lump sum payment or purchase of a short-term annuity and other investments.”

(1) the capital value of the fund may be eroded;

(2) the investment returns may be less than those shown in the illustrations;

(3) annuity or scheme pension rates may be at a worse level in the future;

(4) the levels of income provided may not be sustainable; and

(5) there may be tax implications.”

Although these might arise at the outset of a drawdown plan, the withdrawal at that time is most likely to be an immediate withdrawal of the pension commencement lump sum (PCLS) after which the remainder is invested as per the drawdown recommendation. Otherwise, a recommendation and suitability report would be required to identify the funds from which the withdrawal should be made, even if that withdrawal is the PCLS.

Of course, an ad hoc request for a withdrawal might be a client instruction that can be dealt with on an execution only basis. We wrote about execution only a couple of years ago and everything we said then still applies. You can read that article here.

To be compliantly dealt with as execution only, the client instruction must contain everything required for the firm to action the instruction – how much, when, from which funds etc. And there must be ‘clear and credible’ evidence that a transaction is ‘execution only’, usually in the form of an execution only statement signed by the client to confirm that:

Execution only for existing clients is problematic

It is prudent to consider that any transaction for an existing client is unlikely to meet the definition of execution only. Previous discussions with the client could be deemed to have influenced the client, even where those discussions may not have been recent – see FOS section below.

Whether business is advised or Execution Only is determined by facts rather than by a statement from the client that they want to proceed on an Execution Only basis. A client may state that they do not require advice, but the existence of a prior relationship is likely to mean that advice has already been given that may have a bearing on any execution only request.

Indeed, the FOS may determine a lack of evidence from either party to indicate that advice has been provided. If there is no clear evidence to explain how the client reached their decision and the client had a relationship with an IFA firm, the FOS is likely to conclude that they got the information from their financial adviser, even if there is an Execution Only Statement on file. The FOS is also likely to take account of a client’s background and previous history of investing. If the investor has no link to the investment or financial services industry and little or no history of transacting on a non-advised basis, the FOS is likely to investigate the matter further.

Accordingly, firms need to give very careful thought as to whether an instruction from an existing client is likely to be at risk of not satisfying the criteria for execution only treatment. If there is doubt, then it would be wise to implement the instruction as an advised process as described earlier.

Overview of the withdrawal process 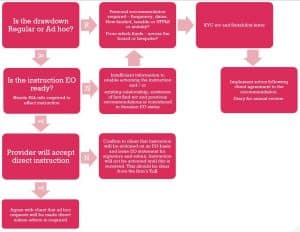 To paraphrase the old saying, a drawdown plan is for life. Setting a plan up is easy. The hard bit is the ongoing management, especially once the client starts to make withdrawals. Follow the guidance here to make sure that you manage client drawdown plans compliantly.

Ensure that every withdrawal is subject to a recommendation and suitability report process other than as indicated here. Be wary of implementing instructions from existing clients on an execution only basis. Review your terms of business for clarity of how client instructions are handled.
SUIT - Beautiful Reports
CREATE BEAUTIFUL
SUITABILITY
REPORTS